The thought or quote of the day is, "Choose your success by choosing your thoughts." 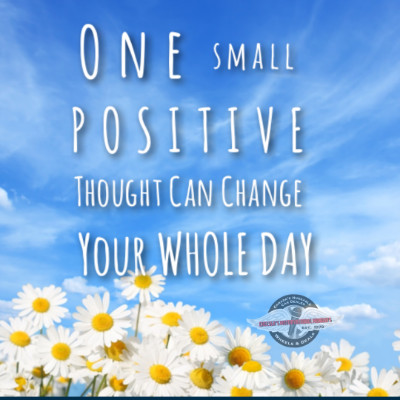 I think that's ever so powerful. What we concentrate on is what that day becomes, what the week becomes, how the month can be. By choosing your thoughts and creating them into a positive thoughts, maybe letting some negative stuff roll off your shoulders and not getting so centred on it.

It's like someone comes to work and they got cut off and they're still worked up 30 minutes later. The person who cut them off probably doesn't even know and is just going on about their day as happy as can be. Just as you're going, just kind of think, "Is this a positive thought to have? Is there really a reason to be upset, thinking negatively about this, to continually dawn on it, keep it going?"

With the smaller things in life, if it's negative, just let it clear your mind, think of something positive, and put the little negativity into perspective. Is it really that bad? I think when we realize we look at it, we live in a beautiful city, beautiful country, it's always really not that bad. I mean, extreme things happen, that's different.