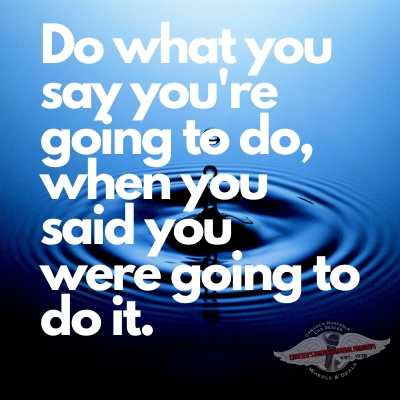 When you're telling yourself something like "Oh, I'm going to get the shed cleaned up this weekend," how many weekends in a row did you say you were going to do it? So it just becomes something that we almost are telling a lie to ourselves, or it's almost like a lie to other people, and when you're okay breaking those types of things continuously, what else is it affecting in your life? The thing you're breaking could maybe just be a minor thing, does it really matter if the maybe the shed doesn't get done? Not sure, but don't say you're going to do it, because it's just that repeated, I guess, being okay with the breaking that can really hinder your life as you're going forward and growing. So I just, I hope we've motivated you this week to kind of think of those things you're committing to or just think of what's coming out of your mouth and don't make those commitments if you're not going to follow through. I hope you Have a Huggable Week.