Hey, everybody. It's Peter and today we're going to do a complete in-depth review of a 2022 Toyota 4Runner. Now what's interesting to me is I just went on Toyota's website and they're telling us that the 2022s are nearly sold out, which makes sense. This one has less than a tank of gas of kilometers on it. It's brand new. And they also said on the website that the 2023s are also sold out.
:
Now if you continue to do your research on this vehicle, you're going to find that that's an interesting thing because almost every reviewer starts off by saying, "This is dated." So why do they say it's dated and why is it nearly sold out? Why is this so popular? That's what we're going to address in this review.
:
But before we get going, I want to think Jim Gilbert's Wheels and Deals here in Fredericton, New Brunswick because they actually do you a favor in addition to doing me a favor, they allow me full exit to their vehicle line. And if you want to compare this vehicle to other vehicles, we can do that.

If you have questions that I don't answer in this video, which should be entirely possible, I can't get to everything, let me know in the comments below because I can come back to your comments, answer them there, and I can also come back in a future video with this vehicle to make sure you get the answers you need.

From here you can watch Peters Video or Read What he says the choice is your enjoy... this is a great review ether way...
:
So let's start with that dated criticism. First of all, body design, although it has been updated, kind of stays the same as it has been for a while. Biggest criticism that people have with this is in a world where SUVs are eight, nine, 10 speed transmissions, this one's got a five speed transmission. In a world where SUVs are full unibody construction, and if you don't know what that means, it doesn't matter.
This one's ladder on frame. That's how they used to build vehicles. That's really what they like to do. If you talk to off-roading people, they like the body on frame off-roading style. Does that matter to you? Well, maybe it does, maybe it doesn't. But this is a very, very capable vehicle off-road.
: 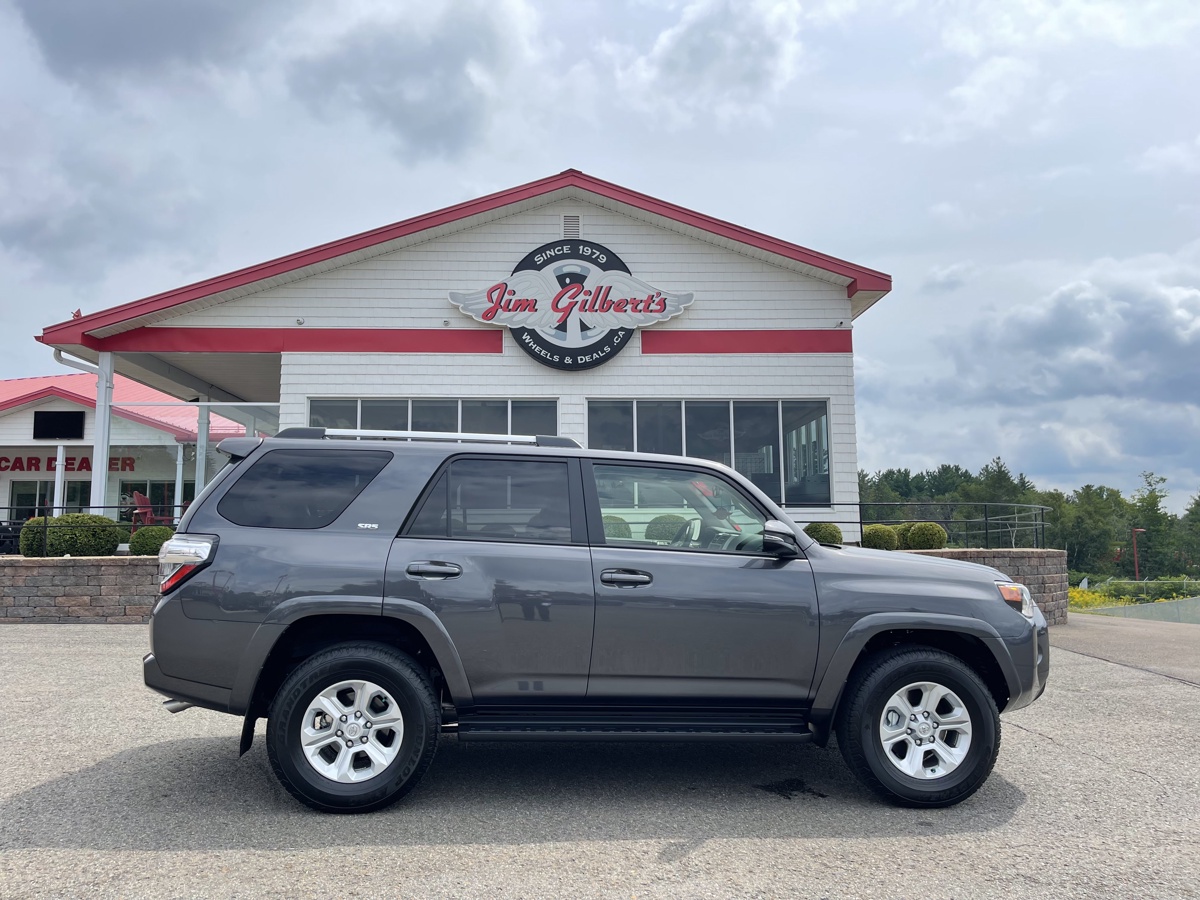 And that's something to keep in mind that you can really go anywhere and almost do anything with this. But while some say it's dated, it also has a lot of modern technology. And that's what we're going to focus on in this review as well, so that you get a full picture of what is dated and maybe dated for a reason and what is fully modern, which might be what you're looking for in an SUV.
All right. Let's address one of the dated features on this. This is an off-road vehicle. It's designed to still be capable of off-road. And while most modern SUVs are designed with fuel efficiency as number one or one A in the design, this one still focuses on capability. And that means you have great approach angles here, which means you can come up to a large hill, something off-road, large bumper rock, and you can get to it.
:
Now this one happens to have the side steps here, which means it does take away from some of the ground clearance, some of what they call the breakover angle, but it still has great departure angles over here. The reality is with this vehicle, with these types of roof or steps down there, you're probably not going to be going as off-road as you might be in something like a Jeep Wrangler, but you're still very capable of tough off-road conditions.
And we're going to talk about some of the technology in this a little bit later as we do that. One other thing you're going to notice is I have the windows open here. We're going to show you the rear window, which opens as well. But one thing that's kind of surprising to me is while modern SUVs tend to go panoramic roofs, this one has very large windows.
:
It has a very large sunroof, which we're going to show you. But this angle here is more of an upright angle. Again, modern SUVs are going for a little bit more fuel efficiency. So they bring this back, they cut this down. And that kind of makes the interior by the driver's environment feel a little bit smaller.
You can see here having this more squared look. And it doesn't look that square from the outside, but it really gives you some room from the inside. Open the windows in this vehicle, you have an open air experience. It's not Jeep Wrangler open air with the top off and with the doors off, but compared to something like a Jeep Wrangler, which has very small windows, you do feel a very airy kind of outdoorsy experience even inside this vehicle.And we're going to show you that when we get in. Overall, everything else, a couple other little things you're looking for on a vehicle like this is very tall sidewalls. So these tires are P265/70R17. That 70 means 70% of the tires width is right here in the sidewall. You want a lot of sidewall compression, a lot of sidewall space when you're doing off-road type things. And that's what's something to look for here. A lot of those modern SUVs, they show the ads going offline, but they don't show what reality is that you can get pinch flats when you have large steel rims and small rubber sidewalls. That's just not a great combination for rougher roads, which means these are great, not just off-road, but potholes, winter conditions, all kinds of things. Let's take a look at the back. I want to show you a couple things there, and then we're going to hop inside. Along the backside of the vehicle, there's a couple cool features, but the biggest one is there's no glass right here. It actually comes down into the tailgate, and I haven't seen that since the eighties.
:
Toyota's been doing it the whole time, but not a lot of other manufacturers have been. So for a third row passenger experience, you could set the third row up here, headrest right there. You could put somebody in the back here, and it's almost an open air experience for them. We're going to talk about that third row in a second here, but we're also going to mention the hitch out back here. This vehicle tows 5,000 pounds. Something like a Jeep Wrangler, even the four doors, they only tow 3,500 pounds. So you're really competing with something like a Grand Cherokee of course, in that. But you have some more capable off-road. Now again, some Grand Cherokees very capable off-road, some are not. 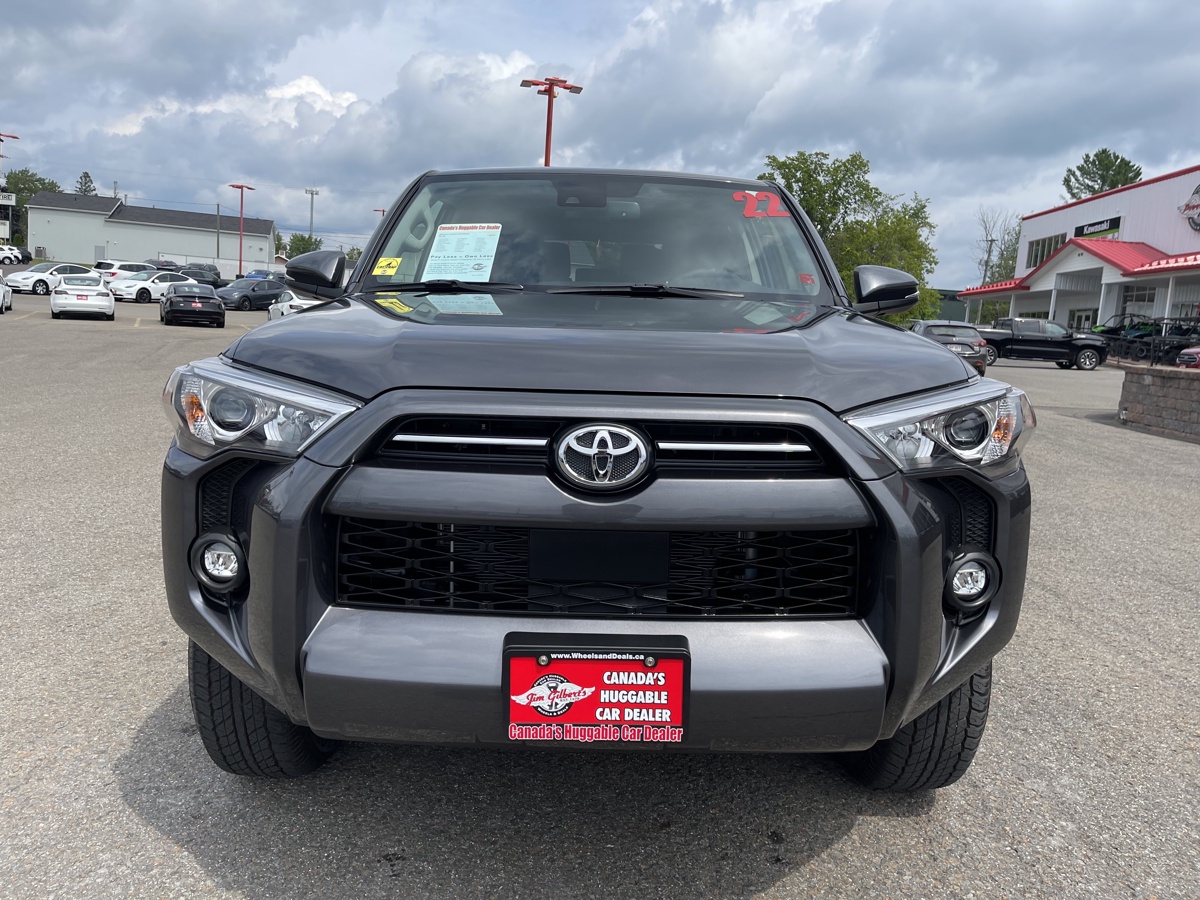 Every 4Runners going to be very capable off-road. When you pop this trunk open. Actually, before we go do that, you're maybe wondering where the windshield wiper is here. And again, it's buried up here. We talked about the Tucson doing that in my last review of the Hyundai Tucson. They're now moving their wiper up here.
:
Well, Toyota's had it up here for a long time. Keeps the back cleaner and allows that window to go down. And what's nice is instead of having your rear to frost on and having the snow and ice melt onto that wiper when you park your car, it melts down, sits on that wiper and melts there, and then refreezes, instead of having that happen, it's all protected from the weather.
It's up here underneath. So it does a sweep down from above instead of up and down. It gives it cleaner style, allows the window go down, keeps you from snow and ice. Super practical. All right. Looking in here, you're going to see a little bit of a disappointing cargo space, and that's because we've got the rear seats up.
:
Now there is a cargo blind, so the top sort of cargo blind cover in the way of me putting these seats down right now, just because this vehicle is for sale and we have everything in the vehicle. You're going to move things around and do things as you need to. But I just still want to point out, you do have third row seats here. 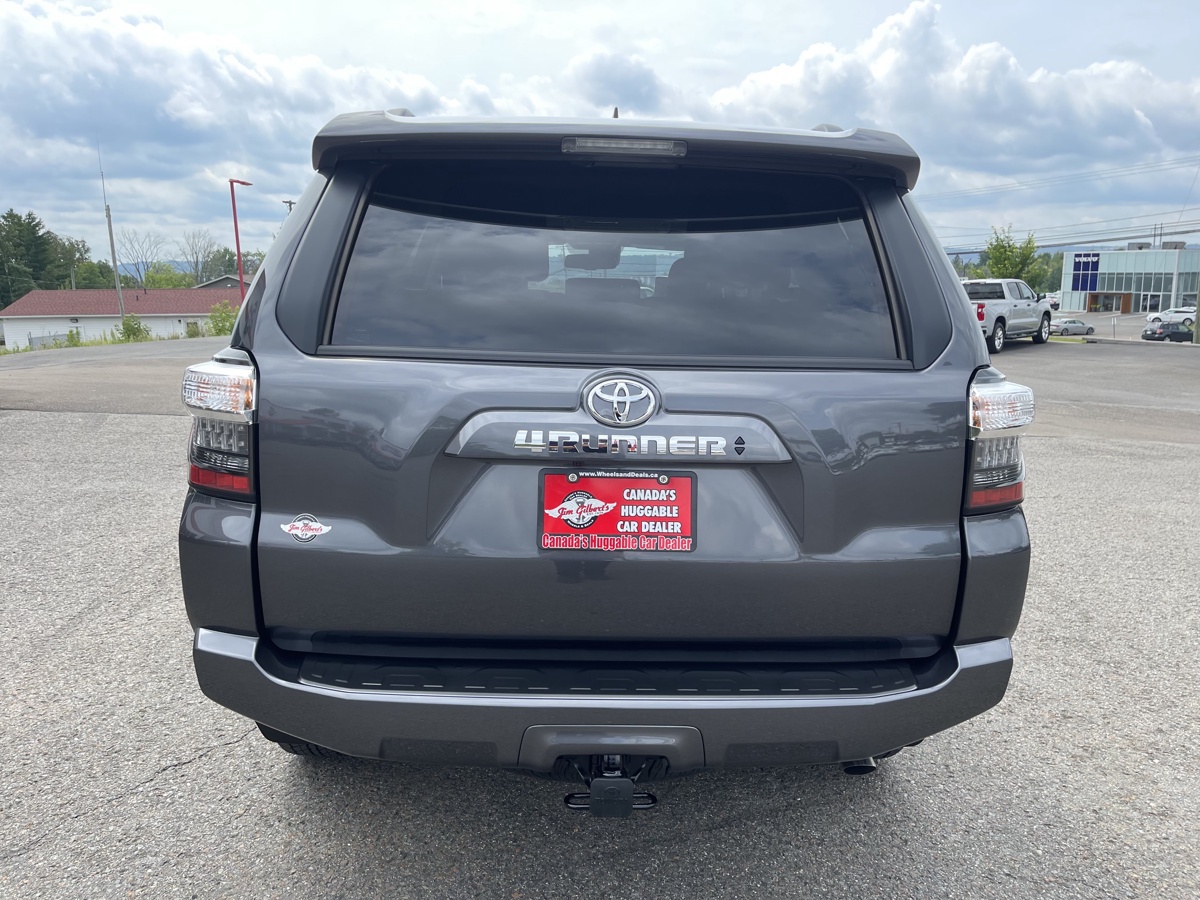 There are two seats here. They're not huge. They're more in what I would call temporary seats, child seats. But you do have the option of taking a couple extra people when you need to back here. And if not, you've got a cargo fold down. This is a 50/50 split. You could just use one of them. You also have a 40, 20, 40 split. What that means is the armrest can fold down.
:
You can have a really long pass through through center of this vehicle all the way to the front. Or if you have a pet back here, you can stick, a family of four could stick four people in this, and the pet could sit there and have a view into the middle there, which is kind of convenient as well. I was just repositioning the camera when I realized something.
There's one thing that I should point out. I am about six feet tall, and you can see this is very tall. A lot of even larger SUVs, they don't have sort of the head clearance that I have. However, there's a problem with that. A lot of vehicles only have the handholds here, so you've got handholds in the outside here to reach down, but if you're shorter than me, that's going to be hard to reach.
: 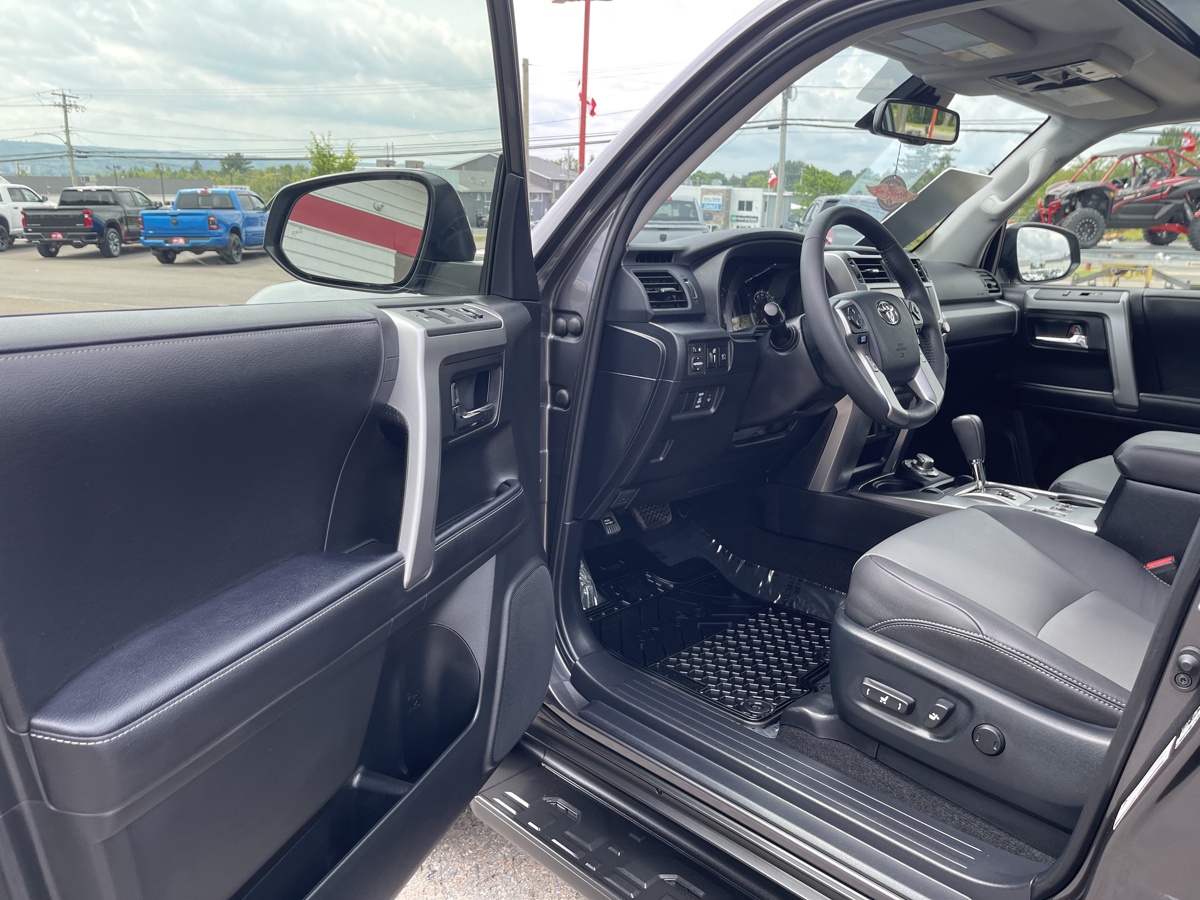 Well, they've solved that problem with this sitting there, right there. And if you were still short on this, you can attach something to this, even a longer string or a longer strap down there so you can make sure you can reach it to close it. So really nice upper trim levels do have the power tailgate.
This one does not, but very easy to close no matter who you are. All right, before we head to the driver's environment, let's hop in the backseat. Now body on frame vehicles, which again, is the construction of this vehicle, can tend to be a little bit taller. So you've got to step right there if you need it. You can jump in here.
:
So if you've got kids getting in, it's pretty good. Now headroom is just okay. I'm six feet tall and it bumps up by my head to give me two, three fingers above me. So that's again, that little bit raised floor. But you've got a very comfortable seat overall here. And you've got, again, the sunroof comes back, which is how you get the rays up here.
So where I'm sitting, I'm fine. If I lean forward and up, then I do have contact with the ceiling. But you're not going to do that in the car, right? So again, compared to some other SUVs, you can have a little bit more rear headroom. But again, I'm a six footer, totally comfortable here. You can see sitting behind myself, this is where a six footer would sit, lots of room.
: 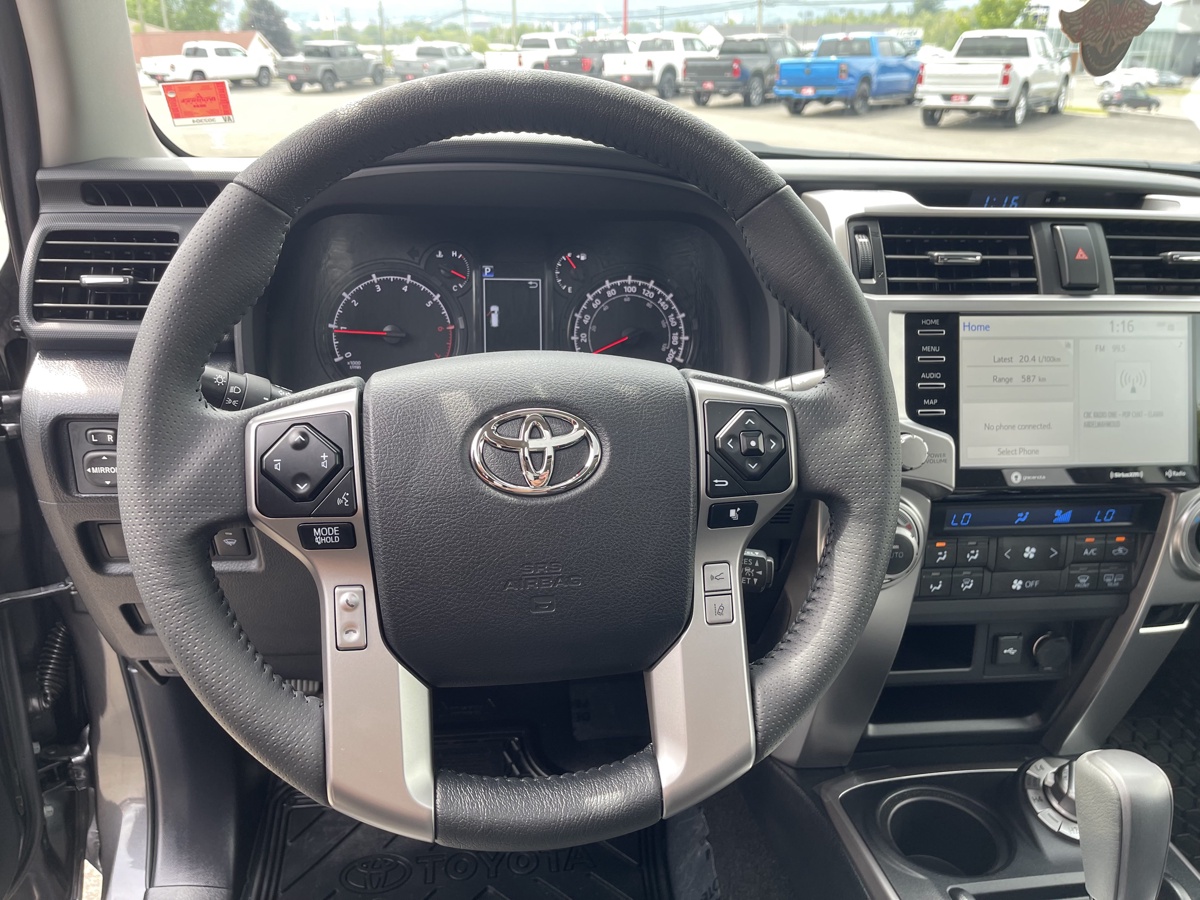 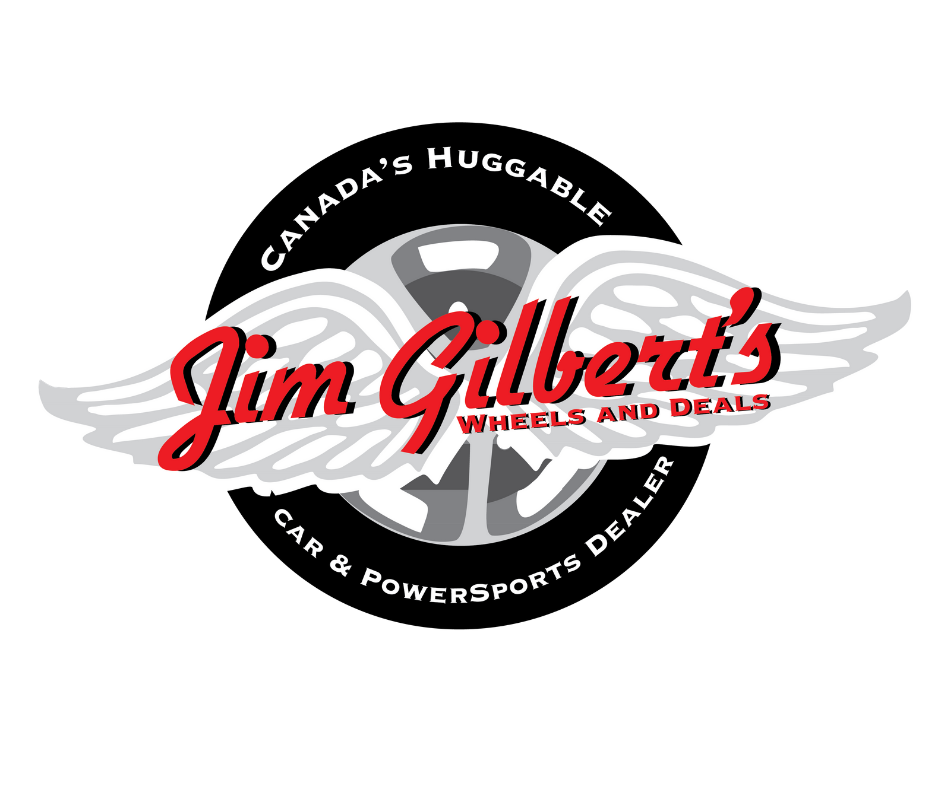